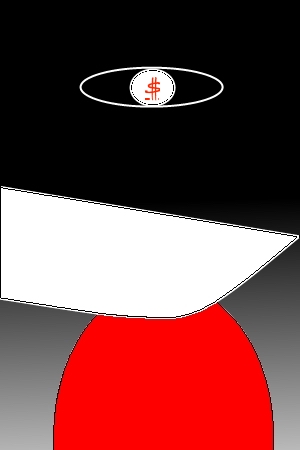 «Technology companies are beginning to encourage surrogacy services in the same way they have already incentivized freezing eggs. Facebook and Google offer generous incentives for surrogacy services, citing the need to retain talent. In doing so, they are creating a subclass of of ‘birthing women’ who generally belong to lower socioeconomic classes.»

First the eggs are frozen, then embryos. Later, when you’re ready to be a parent, you contract the services of a surrogacy company, pay, and implant the zygote in a third party to be «incubated». You pay in advance, and the contract specifies the terms of the agreement, especially those pertaining to the surrogate herself. For the duration of the pregnancy, she ceases to be a free woman; unable to make decisions regarding her body, health, and life.

Only after the surrogate goes into labor, we’re talking about a year after the selection of the «birther» or egg donor from a catalog, then implantation, will the clients go to the hospital to retrieve «their» child or children. There will be videos and photos taken from the operating room table next to the surrogate mother – a baby freshly-pulled from her entrails (literally, as cesarean is common for these births). The parents will be ecstatic while the surrogate mother suffers the physical, emotional, and psychological effects of having just given birth, and these effects will sometimes be even worse than the loss of a son or daughter.

Surrogacy is not new, the first legal arrangements «womb-rent» having been made in the United States in the 1980s. However, cases were rare and stigmatized at that time and even after. According to the CDC, in-vitro babies only made up 3% of births in 2015.

Now there is a sudden «explosion of demand» which appears to be driven by the tech industry. According to data from certain tech companies, egg freezing has grown by over 500% (year over year) in Silicon Valley. And surrogacy applications now make up 20% of the inquiries received by the companies for which they work (Secrets’ note: Is this something to do with the companies funding it? I can’t tell from how this is phrased.)

The technology companies in question have begun to subsidize surrogacy services as they did with egg freezing. Facebook and Google, for example, will reimburse employees up to $20,000 of the bill for services which reach up to $200,000 – covering the cost of «compensation» for the surrogate, hospital bills, and expenses. Some companies even offer lines of credit.

In an effort to «attract and retain talent,» Young Smith has asked 98,000 Apple employees to find out what kind of benefits interest them most. All these efforts are part of a growing tendency to offer favorable options for employees in Silicon Valley companies, on the one hand to recruit new female staff, and on the other to build loyalty, and for this it creates incentives for both egg freezing and hiring the «services» of a surrogate. This is done so as to not limit the careers of these employees or affect other interested parties. There is a recognized gender imbalance in Silicon Valley when it comes to women in senior positions in Silicon Valley, and these benefits can be seen as an attempt to rectify that. Of course, what is not commented on in these discussions is that this generates a kind of subclass of women who give birth and who are from lower socioeconomic classes.

These subsidies and/or grants are also favored by supposed non-profit organizations, which have the backing of the industry and lobbies, clinics, intermediaries, eminent law firms and large pharmaceutical companies: EMD Serono, a subsidiary of Merck; the Mandell clinic (pharmaceutical); Integrity RX, etc. (If you can afford it, then nothing prevents you from having a child. Article link). This is also to say nothing of the large network of international fairs exclusively for gay men.

In fact, this assistance program provides more than one million dollars in financial support to its clients annually, through more than 50 providers. Services are provided in two ways: Free services and discounts donated by leading providers in assisted reproduction (75% discount on the price of certain medications for women undergoing ovarian hyperstimulation treatment) and others used not only in egg donation, but for the medication that mothers need to ensure the embryo selected from a catalog implants successfully. Cash and credit line grants are also available to «future parents» that are financed mainly through conferences and donations from friends of the system.

Homosexual men were the first to break the stigma against surrogacy. According to industry studies, homosexual couples in the US account for 1/3 of market demand, 10% are single men, and 57% are heterosexual couples. The industry is also growing as a result of permissive legislation, although there is still strong opposition which causes many people to keep it a secret. Some women even simulate their own pregnancy.

Going back to Silicon Valley, Economist Tech Editor Alexandra Suich Bass has described the Bay Area as a an incubator for the future of fertility in the US. «Rental bellies» are an extremely expensive practice, and people in the technology community can afford it without having to miss work, or put their career or health at stake. the publicity around these companies bombards us with tales of the generosity of the surrogates, praising the goodness of women who have no other way out. Jennifer Lahl , President of CBC, says that these women are mainly from the lower-middle class, and mostly military wives. They seek extra income either by necessity, or to invest, or to pay for their children’s futures.

Numerous studies have shown that military wives constitute a disproportionate percentage of the population of pregnant women in the United States. These women, considered «ideal substitutes» have been the target of marketing efforts seeking surrogates. These women are part of a very masculine subculture and use their military mentality to guide them through the sacrifice of surrogacy. Military women are a prime target for surrogacy agencies, intermediaries and clinics in the United States because they tend to have limited education, little chance of entering the labor market, and tend to have a low income. They do, however come with the advantage of having basic medical insurance, which makes them a «cheaper» surrogate option [compared to women who do not].

The surrogacy industry seeks to brand itself as solving the issue of infertility, but nothing is further from the truth. Today surrogacy has become a «commodity». One more luxury good for those that can afford it, whether or not they have fertility problems. A luxury that allows access to parenthood without jeopardizing your career, body, or health. It allow them to stick to their schedule, because they are people with «busy» lives, organized, with good purchasing power, who commission and plan almost everything.

«There is no right to have a child under International Law,» said Maud de Boer-Buquicchio, special investigator on the sale and exploitation of children (including child prostitution, the use of children in pornography and other material that depict sexual abuse), who presented, in March 2018, a report to the Human Rights Council in Geneva affirming that: «Children are not goods or services that the State can guarantee or provide. They are human beings with rights.»

She calls out that surrogacy is a growing industry driven by international demand, especially for rich states that involve surrogate mothers in developing countries, and asserting that surrogacy, as currently practiced in some countries, including the United States, generally amounts to the sale of children.

Hundreds of associations around the world have signed the CIAMS » International Coalition for the Abolition of Surrogate Motherhood » manifesto calling for the abolition of gestation substitution. Those who sign agree that «The best interests of the child must be at the center of any decision made regarding paternity and parental responsibility decisions,» as the speaker stated, but we think that to avoid the paradox of rights violations of babies, we must focus on the initial problem, the reproductive exploitation of mothers.

It is not enough to mention the word «altruism», the truly altruistic cases are marginal. Professor Miklos Lukacs of the University of San Martín de Porres, Peru, (science and technology / Political Philosophy / Epistemology / Applied Ethics), describes it as hypocrisy terminology, since most of the income remains in the hands of intermediaries, and could never meet the demand generated by the industry. The idea that eliminating the payment to mothers reduces exploitation is as stupid as the arguments of some media and intermediaries, it is not surprising then, he adds, such as countries like India, Cambodia, Nigeria, Mexico, etc … all of them with more lax laws, and high levels of poverty, have absorbed this demand.

In addition, countries such as the United Kingdom, Canada, and traditionally «altruistic» American states, such as New York, are debating or have instated new bills that would allow an openly commercial version of surrogacy due to the lack of available volunteers and legal complications stemming from the international surrogacy.

We do not believe surrogacy should be regulated. Instead we call for its complete prohibition. Work is already under way on the development of an international agreement inspired by the abolition of slavery for the abolition of surrogacy within the framework of the United Nations Organization.

Special thanks to secretsandbis for the amazing work of translation

Letra Escarlata is Member of the International Coalition for the Abolition of Surrogate Motherhood CIAMS. 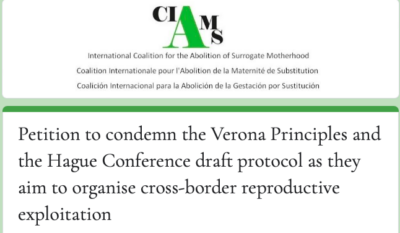 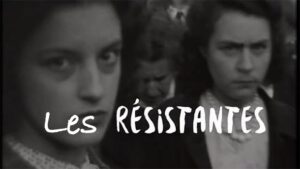 My Links in Tree 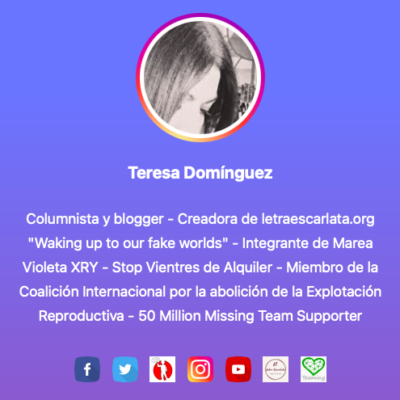 letraescarlata by Teresa Domínguez is licensed under a Creative Commons Reconocimiento-NoComercial-SinObraDerivada 4.0 Internacional License.